Why Giving Is Good for Business

Is giving always a win-win?

Blake Mycoskie, founder of TOMS Shoes, talks about giving as a critical factor to the success of the company, and asserts that giving not only feels good, but is also both good for business and for building your brand.

“Giving feels good,” Blake says, “and everyone here in this room who has given their time, their energy, their financial resources, you know how good giving feels.”

Watch the video to hear the story about a company that inspired a movement.

Well, when I started TOMS, it was really a spontaneous response to help these children in need that I met. And when I went and started putting those shoes on kids' feet and took my parents, and my brother, and sister, and friends, it felt so good. It was the most incredible feeling and I've gotten to repeat it so many times. So giving feels good and everyone here in this room who has given their time, their energy, their financial resources, you know how good giving feels.
But what I've learned, the past four and a half years, is that giving is also really good for business. And it's really good for building your personal brand when you're known as a giver. And I think that... I've experienced this so many different ways. One of my favorite experiences and how I learned how the power of give from a business perspective was, I was in this airport in New York City, gosh, it was probably five months after we started TOMS. Way before I even came to Catalyst the first time. And at this point I had never seen a stranger wearing our shoes. Right? So I see my friends, my family, my interns, but never a stranger.
And I'll never forget. I was at the airport and I looked down and there's this girl and she's wearing a red pair of TOMS. And so I'm obviously excited. Right? So I decided I got to ask her about her shoes, but I didn't want her to know who I am, so I'm doing the kiosk and I say, "Excuse me. I really love these red shoes. What are they?" And she kind of looks up at me, eyes wide, and she says, "TOMS. TOMS shoes." And of course I'm trying to play it cool. Right?
So I'm doing the kiosk and not really paying attention too much. And she goes, "No you don't understand." And she literally grabs my shoulder and she pulls me aside and she says, "You don't understand. This is the most amazing company in the world. When I bought this pair of shoes, they gave a pair to a child in Argentina. And there's this guy, he lives in Los Angeles. I think he lives on a boat." She literally started telling me my life story word for word with more passion than my mom tells it. Right?
But what I realized and what I learned, and of course I eventually told her who I was and we started laughing, is that what gave her the passion to tell that story to a stranger was the fact we were giving. And she wanted to share that. She wanted to be part of that and she was part of that because she had bought a pair of shoes. So giving feels really good, but it's also a great way to, in your own personal brand, to build it. 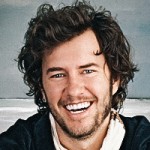 Blake Mycoskie is the founder and chief shoe giver of TOMS, and the person behind the idea of "One for One," a business model to help a person in need with every product purchased. A simple idea has grown into a global movement: TOMS ...