Does your leadership team have the freedom to speak into your life?

Jon Brown—pastor of Sandals Church in Riverside, California, and previous owner of 24 Carrots Catering and Events—recognizes that leaders can become so blinded by pride in their company that they risk losing a client or having other negative long-term effects on the organization.

In this video, he discusses the need for leaders to have a team around them who have the freedom to “speak the truth” and provide a fresh perspective.

There's two kinds of pride. I have a lot of pride in my company. We have a great company and I have a lot of great pride in my company. There's another kind of pride which is a very selfish pride, which is a very self-protective pride, where that can get you into trouble. When I want to win something so badly or when I want to just make sure that they don't take advantage of me and I get blinded by my pride, I make stupid decisions. Sometimes we can get entrenched in, "This is the wrong thing and that should have never taken place," whatever that thing is, and we get so entrenched in that, that we don't see the long-term effects of that.
Issues do come up with clients there are things that happen and I can be so entrenched in defending my company that I don't see the long-term effect in that, and that's losing a client. So my pride, I need to set up on a table somewhere sometime, eat some crow and be able to say to a client or whatever the situation is, "I'm willing to come to the table even if I feel like I'm right," and deal with something for the long term effect of it.
My leadership team has the ability to speak into my life, I allow them that latitude to say, "Jon, I'm not so sure that's the right way to go, I need you to really look at this", and so sometimes I can't see my own pride, again I'm blinded at that point but my business partner sees it, or some people around me see it and they have the permission to point that out. I have had my vice president call me out on things, didn't like it, but I'm certainly not going to get angry about it, maybe in the moment, but I've often driven away, thought about it, come back and said, "You're absolutely right. You're absolutely right." 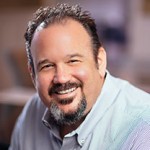 Jon Brown is pastor of Sandals Church in Riverside, California, and previous owner of 24 Carrots Catering and Events.