When It’s Time to Let Go of A Good Idea

Could holding on to an idea be holding you back?

The passions and dreams that inspire leaders to go above and beyond are often the same desires that keep leaders from realizing the valuable opportunities right in front them. Lynn Lilly, founder of Craft Box Girls and National DIY DAY, learned that she had to let go of what she thought her company should be in order to achieve the success of what it could be.

In this video, Lynn shares her insightful story about how holding on too tightly to the initial idea for her new company was actually holding her back. When she finally recognized that her plan wasn’t working, Lynn switched gears to more fully embrace what her customers wanted. Designing her organization around the customer produced the results she dreamed of. However, Lynn learned a valuable lesson that she continues to rely on today as her organization grows.

“You can’t be tied to a specific idea or component of your business in the beginning because you’ve got to be able to pivot,” says Lynn. “You have to be able to fail quickly. You stay with the same mission … we still have the same goals, but we’re reworking that a little bit. We’re listening to our consumers.”

How tightly are you holding to your original idea in the face of information that it may not be working? Could holding on be holding you back?

Ask yourself: What do your customers really need from your product or service? What possibilities exist if you pivot and transform your ideas to meet their needs?

When we started Craft Box Girls we had this grand vision to be “Etsy meets a robust content site.” I held onto that vision for almost a year realizing after a year of struggling with the ecommerce side of the site that it just wasn’t working. We realized that people wanted to come to Craft Box Girls for great content. They wanted to discover projects. They weren’t coming to shop for hand-crafted goods. So it took me about a year, which was way too long and that’s a big learning for me. To learn that I need to fail quickly, and realize when something’s not working because I was passionate about it and thought that we were going to be the next Etsy and take Etsy over. But I realized that that wasn’t really what we were connecting with our consumers over. Going with ideas but learning you’ve got to fail quickly. You’re in a small business with limited resources, it’s okay to follow an idea but you need to really figure out quickly if it’s going to work. Because if you stick with those ideas and you take your company and your team down a road because you’re so passionate about something you can’t realize when it’s not working, that’s a disaster for the entire company. So I think as a leader you need to really be self-aware and you need to be aware of the company and looking at the big picture, not just what your passions are and what your wants are, but what’s best for the company in general. So that was the pivotal point for us because we realized that we needed to focus on content. Content was what we were good at and so we had to kind of think about how we were going to pivot the company and really kind of go back to our roots, and what we’re good at, and why people are coming to us. You can’t be tied to a specific idea or component of your business in the beginning because you’ve got to be able to pivot. You stay with the same mission. We still have the same mission, we still have the same goals, but we’re reworking that a little bit. We’re listening to our consumers. Our consumers wanted to come to us for content. They didn’t want to come to us to buy hand-crafted goods. They were fine going to Etsy for that. So we really learned what they wanted us for and that was hard. It was hard to kind of give up that initial thought of what we were going to be. It’s a little bit of a pride thing, when something doesn’t work out that’s your idea, or something that you’re really passionate about. But what I’ve learned is that it’s not about me. It’s about the company and it’s about our community and it’s about our team. So setting aside that self pride and yes, I can secretly grieve a little bit inside when something doesn’t work out, but realizing that it’s about the company and it’s about the people that we’re serving. It’s really engaging them and considering them and considering the direction as a whole for the company. 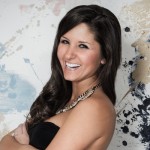 After being laid off from her big time corporate job, Lynn Lilly took her savings and decided to follow her life long passion of crafting and entertaining. The road began on a few dollars, hard work, a lot hours and a lot of creativit...