Trust Your Intuition to Do the Right Things

If you can't trust your own intuition, what can you trust?

Intuition is the greatest output of trust and a strong culture. Angela Ahrendts, Apple’s senior vice president of retail and online stores and former CEO of Burberry, talks about the important role that intuition has played in the culture and success of the company.

Interviewer: You are a leader that is very instinctive, intuitive. One of the things that I teach about natural leaders is that they are intuitive in the area of leadership. I think everybody's intuitive in their giftedness. And so here you are as taking over Burberry six years ago, making major change, lot of instinct, a lot of intuition, which is not really what you think about in the business community. You think of hard facts and getting the details. So how's that your intuition and your feelings, how's that shaped Burberry in these last six years?

Angela: I mean it pure and simple has shaped us. And it's funny we didn't talk about it early on because we had just all come together and were dreaming. But now we say that intuition is the greatest output of trust and a strong culture. And if you have that, then intuition can just flow. And now we say, "We hire for it." We believe that we retain, we've got one of the lowest turnover rates in the sector and we believe we retain our talent because they're empowered to be intuitive.

So many times they come into the culture and they say, "I feel like I'm free. I feel like I can dream and I can use my instincts now." And the world is moving fast and we always tell the teams that you can't you can't prove that something will be successful that's never been done before. And we tell people during the on-boarding process that we value feeling over knowing.

And you know, again, a couple of things that we've done on the screen right now is something that was very intuitive. Very early on about three years ago we launched what's called Art of the Trench. It's a social media platform. Again, our young talent, we know we had to get our iconic heritage product out to a younger audience so our young team said, "Well you got to create a social media platform." Okay. And so a couple of years later five million page views. Customers all over the world downloading, sharing images of themselves in the Burberry trench coat. But that would have never happened had people not used their instincts. 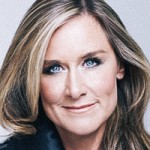 Angela Ahrendts is the senior vice president for Apple Retail, a global leader in consumer electronics, who she joined after being the chief executive officer of Burberry, the global luxury company distinguished by its 155-year Britis...