The Theory of We

Sharon Frame—a dynamic international speaker, author, business owner and former award-winning CNN anchor—implores leaders today to consider the need for values-based, ethical leadership. In this video, Sharon shares her experiences in journalism and the unfortunate reality that has become commonplace: We have lowered our expectations of our leaders. Research shows that a majority of the public do not trust political leaders; another study shows that more than 50 percent of employees do not believe their boss will tell them the truth.

Sharon reveals an approach that can serve as a first step toward resolving this challenge: the theory of "we." This concept includes rising together to consider the interests of everyone.

As a journalist and as a news anchor, I've had many times to read the headlines. You've seen them in the newspaper, the headlines, whatever. You've seen the statistics. You've seen that 19 percent of Americans do not trust or have confidence in their government. These are the top echelon of leaders. "We don't trust them," that's what Americans are saying. Eighty-two percent of people say they do not trust their bosses to tell the truth. This is not a number that just dropped out of the sky. These are real facts and real realities. What is causing that? What precipitates that?
There's something that's broken within the system. There's something that's ripping the fiber of ethical leadership. And what is happening at the top to cause people to be so cynical about leadership? We've seen it, the scandals. It seems at one point every day you picked up the newspaper, every day you watched the television, you saw someone being hauled off to jail, because a scandal is a fact whether it be business and government.
We've seen it so often in our country, and there needs to be a resetting of the compass because there was that moral meltdown for so long. And someone has got to say, "Wait a minute. What does leadership really look like? Is that what it looks like? Because if that's what it looks like, that's what we're telling our young people. And they will emulate that, and that's what we're telling the next generation. That it's OK to be unscrupulous. It's OK, because greed is good."
There's certain again, bedrock principles we hanker and we honor as human beings, as a culture that says, "That is wrong." And perhaps we've strayed away from that were, we thought there are so many different gray areas in our lives, but the gray area tends to rip up the fiber of our culture. And that's what I think happens when we are not having leaders at the top who are implementing, perpetuating, what I call, "The theory of we."
When you have the theory of we, again it's all about how does everybody rise. How can we make sure collectively we are in the best interest of everybody, not just me? So yes, it is important for us I think, to talk about unethical leadership, so we know what ethical leadership looks like against unethical leadership so we can, therefore, make the path clear for our next generation.
There's so much broadcasting of what is not working. We forget that there's a whole lot that is working. And if we play on the string of what's working, I think that's a beautiful thing, because whatever we think about expands. And as a journalist, I know the more we talk about what's not working, the more that becomes a perception of what's real, and that's not necessarily the case. 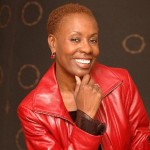