The Me vs. We Leader

Summary
Transcript
A few years ago, I was at a Rotary meeting and the Mayor of Denver - who I won't mention the name of - he was speaking and I just couldn't believe how many times he used the word "I". "I built this," and, "I did this," and, "I did that and . . ." And so, I just grabbed the pen and I just started like, put a little line every time he said the word "I". And after this like hour keynote, there was like sixty something times the guy had said "I". And then I was counting how many times he said the word "we". And it was only a couple times and so I started thinking about this, I/we ratio. And when I'm hearing a thought leader speak or a leader speak, whether it's principal of my kids' elementary school that's giving the State of the Union Address that I go every year or at a Rotary meeting or a CEO of a company, or a lot of times when I'm keynoting an event and I'm getting up to speak, the CEO is giving that State of the Union, I just take a little piece of paper out and write "I/we" and I just put a little dash next to it. And the equation really is, if you say the word "we" more than "I", chances are you're probably a heart-led servant-leader. And if you're saying the word "I" more than "we", chances are that you're a self-serving leader. Employees aren't really tallying but it's very, very obvious when you speak and you say the word "I" a lot. People really pick that up. You can never eliminate the word "I" completely because sometimes you have to say, "I felt this," or, "I did this." But when you're speaking to your people, use "we" when you really want to say the word "I" because it's really not about you. 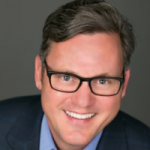 Tommy Spaulding is the founder and president of Spaulding Companies, a leadership development, speaking, training, and executive coaching firm based in Denver, Colorado. A renowned speaker on leadership, Tommy has spoken to hundreds o...