Rewrite How Your Personal Story Ends

Have you let others around you define the way your life should go?

Summary
Transcript
We can be paralyzed if we let those around us fully define us.

Erin Gruwell shares about the inspirational story of students who were involved with the Freedom Writers Diary and how they were able to rewrite their own endings, despite their environment and the negative voices around them.
...and the chair of my English department who should've been the leader, told me in no uncertain terms, that my 150 students, my 150 kids were too stupid and they would never read a book. She went on to say they were dumb, she went on to say they were nothing. And at that moment it took me back to this time when I was a little kid and I came home and I was crying. And I told my father that someone was picking on me because my name is Erin and I knew that my dad named me after Hank Erin.

And my dad said, "You know, Erin, sticks and stones will break your bones but words will never hurt you." And at that moment, standing in that teacher's lounge, for the first time I disagreed with my dad. And I thought, what happens when we tell kids again and again and again that they're dumb, stupid, and nothing, and they believe it. And I walked back in my classroom, I looked at 150 faces and I realized my kids have been called dumb, stupid, and nothing so much, so often, by so many people, that they did believe it and they were acting accordingly. And at that moment, I realized, I need to stand up. I need to stand up for them. I need to teach these young people that they can go anywhere, do anything, and become anyone.

And through the diary of Anne Frank, a little girl in a far-off country my students couldn't even identify on a map, my students found themselves. That little girl in that corner with an ankle monitor and that probation officer, picked up a book for the first in her lifetime and she simply read, "Sometimes I feel like a bird in a cage and I wish I could fly away." And at that moment, she too wanted to use her wings to fly, that moment she too wanted to bust out of that reality and start over. Anne Frank gave 150 kids the opportunity to pick up that pen and to rewrite their ending.

At first, they wrote letters to the woman who saved Anne Frank and they sent them to her like a message in a bottle, and she came. She came to my classroom for 150 kids and then they wrote letters to every author they've ever read, to Elie Wiesel and Zlata Filipovi?. And every time they wrote they realized, we're rewriting our own ending.

And then my students had this crazy idea, can we actually follow in the footsteps of someone like Anne Frank? Can we put our words on paper and will anybody read them? Will anybody care? So I watched 150 kids pen their own stories and we sent it off like this message in a bottle and we called it the little book that could in honor of that engine going up that tracks, "I think I can, I think I can." And every single publishing house in our country rejected them, every single one. Except one, the same publishing house that took a chance on a little girl in a tiny little attic by the name of Anne Frank.

And so it is as it should be. My student's story that the diary 150 kids called the "Freedom Writer's Diary" came out into the world and we thought that only 150 people are going to read it; myself, and these kids like a yearbook and pay an homage to our time in that crazy, chaotic classroom. And it became this phenomenon, 150 kids telling stories of kids everywhere.

So much so that one of my students walked into the Halls of Congress looked around this room of our nation's leaders and said. "Oh, there are so many old white men in here." And without notes, without a teleprompter, my little girl that Maria Reyes, that same girl that had an ankle monitor and that probation officer with her high school graduation, her college graduation, stood in front of our nation's leaders without batting an eye and spoke for all of those people who need leaders, for all of those people who need a second chance, for all of those kids who need to rewrite their ending. And then she got a little cockish looked down on all those old white men who were wiping away tears and she whisked her hair back very dramatically and said, "You know, gentlemen, I am going to be the first Latina Secretary of Education." and then she snapped. 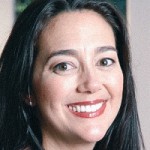 Erin Gruwell is a teacher, an education activist, and the founder of the Freedom Writers Foundation. She created the Freedom Writer Methods, a progressive teaching philosophy and curricula designed to achieve excellence from all stude...