Are you celebrating your team’s successes before criticizing their failures?

Mark Lutz, pastor of growth and healing at Vineyard Cincinnati, explains why leaders should recognize success before failure during coaching moments.

“Catch people succeeding,” says Mark. “[When coaching someone,] I find them doing well at something and I call that out first. You can see people’s fear of being criticized, that kind of melts away, and there’s an excitement and enthusiasm for learning that rises up in them.”

Watch the video to learn more coaching tips from Mark.

Being someone who's wired towards excellence, what I used to be aware of is every point that one of my protégés wasn't doing it exactly right and I'd say, "Oh, I will help them by pointing out to them that this needs to be better." What I saw was it wasn't really helpful because it didn't inspire, it didn't motivate. Somewhere along the line, I picked up from someone to catch people succeeding. And so I do that. I find them doing well at something and I call that out first. And you can see people's fear of being criticized, that kind of melts away and there's an excitement and enthusiasm for learning that rises up within them.
And then say, "You're doing very well. And to help you do even better, let's pay attention to this." Most people respond well to that. If always my coaching is, "Well, that was pretty good, but here's where it's not better yet." In their mind, they're thinking, "I could never do this well enough." I tell people, "I want to challenge you enough that you're not bored, I want you to be a little nervous, like on the first hill of a roller coaster. Where you're thinking, 'Oh my. What have I gotten myself into? Oh dear, oh dear.' I want that kind of nervous excitement, but I don't want the fear of, 'I think I'm going to fall out of the car on the roller coaster.'"
So I want someone to say, "I don't know if I can do this exactly, but I got my coaching, I've got my training, we're going to try this." I want them to have that kind of edge to it. If they're bored, then they're not motivated. And if they're overwhelmed by fear, they're not motivated. So trying to find that sweet spot. And that shift in my idea of coaching has changed the kind of reaction I get. Instead of feeling criticized, people feel successful and they feel encouraged by that. You can see it on their face and they're motivated to learn more. So that shift in my coaching, finding the success, celebrate that first, then we can talk about what else. "You're already doing well, let's talk about something to help you do better." I enjoy my coaching better and I think the people getting coached from me enjoy it better too. 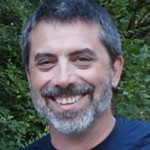 Mark Lutz prepared for ministry at Cincinnati Christian University and studied counseling at Xavier University. First working for a Christian counseling center in Cincinnati, Mark learned how to integrate faith into clinical helping. ...