Building a Nonprofit Board

Do you need a representative board or a power board?

Tino Mantella, president and CEO of Turknett Leadership Group, shares advice for leaders on how to build a nonprofit board.

“Building a board is identifying the right people… and then bringing them on, orienting them and then giving them a great experience in terms of being part of the organization,” he shares.

Watch the video to hear from Tino about establishing a nonprofit board.

So building a nonprofit board, you know, I have some different feelings than a lot of people that have built nonprofit boards. There's sort of a rule of thumb that boards should now be small—under 12 people. All of my boards have been 60 people or more. And the reason for that is because there's generally a lot of constituents and those constituents need to have a say in the organization. So at the Technology Association of Georgia, when I ran that, you had people in financial technologies, and health IT, and entertainment, and on and on. So we tried to have people in each of those areas.
The other thing, depending on the board, if you're talking about a corporate board, I know they're not going to have 65 people on it, but whatever level of board it's having people with the right talent. And a lot of times in the nonprofit world, people have to make a decision whether they want a representative board, or they want a power board. And a representative board is important. In some situations, a power board has certainly represented the community, but they also have the ability to give and get dollars. And sometimes people try to mix those, you know, a representative board, they want one of everything. And in a power board, you want the right people. They're still representative, but they are coming in and you're always educating them on what they could potentially do for the organization. And I always spend a lot of time before we ask them.
A lot of times people are guilty when they bring on a board member because they want that board member so much. The first thing they say is, "Well, it's not going to be a lot of work." That's probably wrong because it's going to be some contribution that they're going to be making. And so we always have a board expectation sheet that they would sign. And here's, you know, here's what we want you to do and here's why we want you and your talents and skills. And typically, we talk about time, talent and treasure.
But building a board is identifying the right people, having the right people ask those people, and then bringing them on, orienting them and then giving them a great experience in terms of being part of the organization. 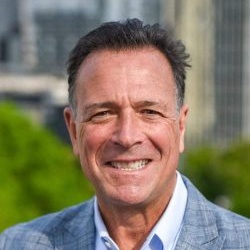 Tino J. Mantella is president and CEO of Turknett Leadership Group. TLG is one of the nation’s top leadership development companies, driven by its proprietary Leadership Character model and grounded in science. TLG has supported hundr...