Are you taking action on the things that break your heart?

In this backstage interview from Leadercast Women 2019, Glennon Doyle—best-selling author, activist, speaker and founder of Together Rising—explains why we should pay attention to and stop for things that break our hearts.

“We live in this culture where, for whatever reason… we don't stop anymore for heartbreaking things,” she says. “We just freeze, we just get numb, we just, ‘Oh, that sucks,’ and then, ‘Next.’ I think part of being a person is just letting the world stop for really heartbreaking things.”

Watch the video to learn how collective generosity can help put an end to what breaks our hearts.

What Together Rising does is, it identifies things that are breaking our hearts in the world. I'm a person who, I struggle with anxiety, I struggle with depression, heartbreak has been a daily part of my life since the beginning of my life, and it used to be something that I saw as a drawback, as something that made life superhard, and now I see it as like my greatest gift. Because my heart breaks with something and then I think, "Oh, oh, this must be what's breaking everyone else's hearts," and then the team gets together and we find the people on the ground who are doing the best, most effective work, which is often not the big names that you hear of, and then we connect those warriors on the ground in that effort with the warriors in their homes whose hearts are breaking. We don't allow anybody to give more than $25 in our love flash mobs because that was super important to me.
Right now, we've raised, I think we've raised $4 million to help reunite the children at the border with their families, in a few days. And the average donation is $21. And Together Rising has become one of the top three organizations that, not just giving, has organized, who has deployed the funds in ways that have actually been effective, in the country. And this is just a bunch of people in their homes who are just like, "Ugh."
It's just that idea of, "I cannot let the fact that I can't do everything keep me from doing something." Because we don't actually have to do big things. We just have to do our little small thing, along with thousands of other people who are doing their little small thing, and what Together Rising proves is that that actually does affect real change.
Sometimes, we live in this culture where, for whatever reason, because we're based on speed and efficiency and more and more and bigger and bigger, we don't stop anymore for heartbreaking things. We just freeze, we just get numb, we just, "Oh, that sucks," and then, "Next." I don't know, I think part of being a person is just letting the world stop for really heartbreaking things. I guess Together Rising is just really about being a person, with other people, and like staying human. 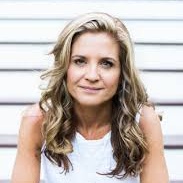 Glennon Doyle is The New York Times best-selling author of "Love Warrior" and "Carry On, Warrior." She is an activist, speaker and founder of Together Rising, which has raised more than $11 million for women, families and children in ...