Adversity Will Define You as a Leader

How do you stay focused in the midst of the storm?

When you are in a crisis, clarity and peace can be uniquely present. Tremendous focus and attention in those circumstances allow us to clear our minds of things that don't matter in the moment. In this video from Leadercast Live, David Allen, founder of Getting Things Done, explains why we often feel peace during times of chaos.

I want to share some things with you that may give you a little more creative space in your life, because space is really what we're after. Room. And over the last 30 years I've paid attention to what it is that people really are after in order to be more productive, and it's not work harder, it's not spend more time doing something.

I'm going to start with a story. 1990, I took a sailing trip with my girlfriend at the time to Santa Cruz Island. It's about 26 miles off the coast of Santa Barbara. It's a lovely island; rugged, sheer cliffs, a lot of rocky out-droppings. We anchored in a tiny little cove, went below to make dinner and the wind started to howl. This is called, "The Windy Channel," by the way. And it really started to howl. It started to blow down the canyon up above the cove we were anchored in, and I got this strange, queasy little feeling that the boat was moving. Oops. Went up and discovered, yes, we were dragging anchor, as they say.

I tried to pull the anchor up. The winch froze and couldn't get it up. I started the engine to try to be able to move somewhere and not hit other boats. We ran over the rear anchor. Now we don't have a propeller. It's frozen. We're starting to be blown out to a very crazy ocean. It felt that way. So in midst all of that, called the Coast Guard. It was going to take three hours for their heavy weather boat to try to rescue us. We were being blown down the cliffs, anywhere from 50 yards to 100 yards from crashing onto them, dragging anchor, and at a certain point, amidst this craziness and we were ready to jump ship, we looked up and saw most beautiful moon that I can remember seeing. It was a full moon, and amidst all that chaos there was a kind of simplicity and an ease, and almost a Zen-like kind of peace that came over my girlfriend and myself.

I tell you that story because every one of you probably has an experience at a time that, in retrospect, you would have called it a crisis, an emergency, and amidst all the chaos as you were dealing with whatever that was, there was a kind of peace and calm and getting into your zone that happened. Can you all relate to that? Because, strangely, when you are in a crisis there is a kind of a peace that shows up there. There's a kind of peace that shows up. Why? Well, what are you doing in a crisis? You're focused on a very specific outcome. Following your intuition, taking action, making decisions.

When we were on that boat, where did tires or taxes or email show up in my consciousness? None. Very clear exactly what we were doing. Very clear outcome called 'live'. And that's what happens in a crisis, but the strange thing about that is wouldn't it be nice if you could sort of get to that zone without having the stress or pressure of a crisis force you to get there? 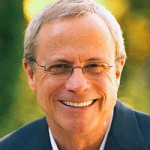 David Allen is the international best-selling author of Getting Things Done: the Art of Stress-Free Productivity; Ready for Anything: 52 Productivity Principles for Work and Life; and Making It All Work: Winning at the Game of Work an...